How can I manage a list of to do items?

The todo.phpΔ plugin (last update: 2005-09-28, version 0.3.6) will enable the management of to do items. WARNING: Do not use version 0.3.1, it contains a nasty bug that will continually overwrite your first to do item. This problem has been fixed since version 0.3.2. 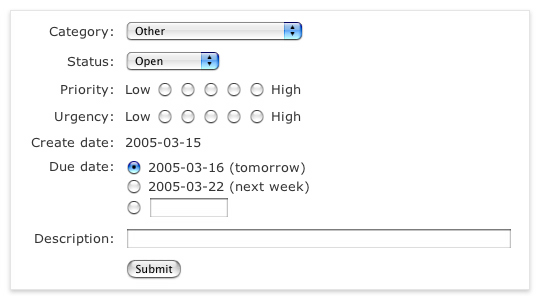 This is needed when a category or a description has a first letter in a letter other than A-Z. Also removed the style a{text-decoration:none;} because it changes the whole site. Greetings and thanks for the usefull script. Petko Yotov March 27, 2005, at 09:54 PM

Hi, Julian. Thanks. When editing a todo, what is needed to make it display as a form? Also, clicking the checkbox on simple display does not change the underlying data, have I disconnected something?

Sorry, I don't have that feature implemented, yet, but it's been in my to do list for quite a while. I find that using documents for storing to do items is somewhat cumbersome. I want to replace the datastore with SQLite or MySQL, but I'm not sure if a lot of people will appreciate the requirement for a database backend--especially given that PmWiki strives to be very simple. I will need a bit of time to do this well, and perhaps even giving both document- and database-backed storage. -Julian I. Kamil

Hi Julian, Good script! I needed a column for names of the person the todo is assigned to, so I added that (if anyone interested, its todoa.phpΔ) but never quite got the hang of how to complete a todo. The only way I understood was to add a "Completed date:" on the todo page, but I see code for doing it via POST. Care to explain the various ways this is possible? /mac 2005-06-23

Mac, I haven't gotten a chance to finish the in-place editing feature, so as of now, the checkboxes function only as a display and you need to manually add the completed date field to "complete" a to do item. One of these days, I'll get to finish it up... :-) -Julian I. Kamil

Hi Julian and Mac, great script! Thank you for it - found and fixed some little bugs in todoa.php and in todo.php concerning translations and "create date"(if anyone interested, its todoto.phpΔ)- Lots of fun - Peter Waldhaeuser 2006-06-30

Peter, thanks! I'll incorporate your changes in the next revision of the code. -Julian I. Kamil

Hi, I included a feature which gives the option to send an email as reminder to each new todo tag. Comes in very handy for us. Can you include it or use my changes? Just send me a note. Cheers Blazej Floch