This space is for User-contributed commentary and notes. Please include your name and a date along with your comment.

I tried it but it seems not working. I changed the order between flash and java without better issue. So I tried to see a map on my browser by following the tips seen here but it didn't work, so I:

But It still doesn't work.

Do you have a Flash plug-in enabled for your browser? Does the demo site work for you? Do you see an empty frame, or you see no frame at all, the "test.mm" link right below the heading on the demo page? Note that the map is quite large and there is a white space near its top left corner, try to zoom out with the scrollwheel and move the map so it will appear in the frame. --Petko February 08, 2016, at 05:36 PM

Flash is enabled, The Flash version of the demosite works fine. I can see It. As I can't see my map in the java version, I changed the order in the js file

But my page seems still wants to open the Java version and I have an error message: ClassnotFoundexception -> freemind.main.FreemindApllet.class. Whereas I accepted the security exception of my site. Jvamp February 09, 2016, at 12:32 AM 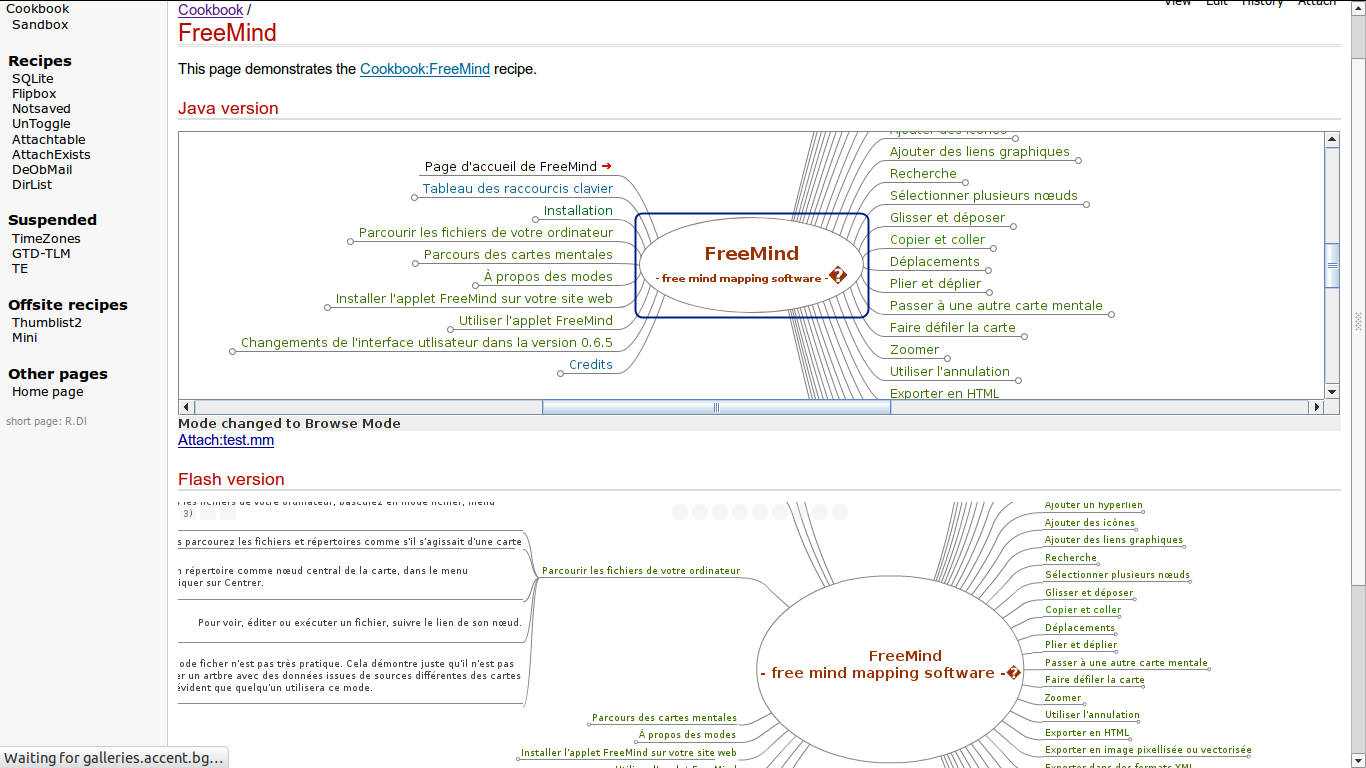 On my page both plugins work, see the attached screenshot. Indeed the Java plugin now requests security exceptions which were not there in the past. If you have a message containing "notFound" on your wiki, check if you have copied the *.jar file to your pmwiki/pub/freemind directory, where freemind.js is, and check if that file can be downloaded by a browser, if not, fix the permissions of that file to be the same as those of freemind.js. --Petko February 09, 2016, at 02:03 AM

I still have an error to see the java part of the demo site, but it might be due to the old OS(Windows XP)that I'm using which can't update Java.
Whereas I tried to update and change again the security exceptions and now I have a white map on my site. I verified that the .jar file is copied and changed the rights initialy at 644 to 777 thanks to Filezilla. However Flash still not work.
I don't know if it can helps but the "handmade modified" cookbook swf.php which insert "correctly" .swf files works on my site.Flash. As I suspected a conflict, I excluded this cookbook but nothing better.-- JVamp? February 09, 2016, at 04:59 AM

Your files "visorFreeMind.swf" and "freemindbrowser.jar" are not the same as the ones on my server. When I visit your site, the Flash applet appears but indeed it does not load the map. Not sure why, the file uploaded to the cookbook and the one on my site were different. Please get the ZIP file from the link and try with the files in it. You should be able to disable Java with FMjava = 0;, but it appears that both Flash priority works and the applet loads but may be broken (transferred incompletely?). See also that you transfer the JAR and SWF files in "binary mode". Permissions of 644 should be enough. Last difference: on my site, the *.mm file is served as "text/plain" and it works. To make sure it is not an issue with your map file, try uploading my test.mm file to your server to see if it works. --Petko February 09, 2016, at 07:41 AM